Johnny Logan never knew the half of it. It’s been almost that long since my last post, and why? Because I’ve been growing a beard, and you people have no idea of the dedication that …

What's on at the local Vue and your TV too.

reviews & news from my not-so-inner nerd

From Ringo to Elbow

Every story that's kept us turning pages till midnight

Adventures with my Amazing Autistic Girl 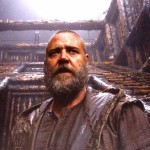 I suppose I should have expected it, but Darren Aronofsky’s ‘Noah’ is not the bouncy beardy that leaps out of kids’ bibles grinning beneficently as the Earth’s creatures sweep into his big wooden ship. Nor is his world the kind of debauched & dustblown desert that Chuck Heston might have strode across, bitterly blocking out the orgasmic cries of the head-scarfed masses as the skies blackened. Instead, Aronofsky paints a bigger picture, starting from Cain’s murder of Abel splitting the tribes of Man, with Noah as the last descendant of Adam’s third son, Seth. By the film’s opening, Abel’s line has been obliterated, Cain’s children dominate the ruined world and only Noah stands for any ‘good’.

But what is ‘good’? Here, it’s the choice between violence and non-violence. ‘The Creator’ (never ‘God’) wipes the world clean because Cain’s act has so totally corrupted his offspring. The film’s pivotal battle, then, is within Noah himself, as he comes to believe that all Man – including his own family – was a mistake from the moment he plucked the forbidden fruit – that, as he stands, Man can never be devoid of violence, and so should be erased to leave a truly sinless world.

It’s an easy choice when two of his boys are wifeless and his eldest son is devoted to Ila, a barren girl, but, when she mysteriously becomes pregnant, the need to fulfill The Creator’s will starts tearing everyone apart.

Russell Crowe is brilliant as this particular Noah. When he advances on the poor girl with knives in hand, you really think he might do it. Just as you believe it when he totally, finally becomes his true self again. If anything, the problem with ‘Noah’ is that Noah is too good. The rest of the cast can’t really touch him. Emma Watson, in particular, just can’t bring the necessary intensity to Ila, and his sons are just gaping fish-mouths of ‘manhood’ compared to their dad. Even Jennifer Connelly struggles to go toe-to-toe with Crowe, and it throws the film off-kilter.

But, visually, it’s arresting. The world is oddly post-industrial, thanks to Cain’s children being assisted by The Watchers, fallen angels turned to stone who only wanted to help Man and who eventually help Noah build the Ark. The Ark itself is less a ship and more an artless rectangle of assembled wooden cubes, through the walls of which we hear the screams of the damned, and I thought Aronofsky was brave to handle the flood so minimally – with more sound than any overblown CGI spectacle. This isn’t The Bible by Michael Bay, thank God. It’s fundamentally about the choices that can wreck a world and make a man.

And there are no guns or superheroes, which makes a change. Russell sings in it, though. It’s a very brief warble, but it was enough to trigger a Les Mis flashback. Just to warn you. And at one point he looks like Kenny Rogers, but then, hey, don’t we all?

Beware, here be spoilers, but God give me strength.
If JJ Abrams wants to exercise his startlingly ‘innovative’ narrative muscle on a Mission Impossible, fine. If he wants to liberally splat lens flare over a monster movie homage to ‘seventies Spielberg, …

God knows, I loved The Avengers. It was one of my 2012 faves because it had everything the best comics had: death-defying wit, globe-shattering action, and a dynamic that touched on the dramatic core of its super-characters just enough to gift …

Oddly, after a trouble-free bedtime these last three years, this last week has seen Eva more restless than usual after lights out.
She’s always found it difficult to settle, which is not atypical – kids on the Spectrum often find it harder …

Suede and Depeche have hardly been slaves to reinvention over the decades, but now they’ve both made albums that purposefully return to former glories.
Suede – Bloodsports
I think I should confess straight off: I’ve always hated Suede. I remember walking up to the old …

I can’t post an icon based comic without giving a shout to The System - the purveyor of regular high class icon based humour. Also, you should check out Lunar Baboon - ’tis very good.

This is me standing alongside the last ‘RCR whiteboard’ in Television Centre. This is where the Team Leader in charge of allocating the news stories fills in who’s cutting what & where for the One, Six …

Fresh on DVD but still catchable in some picture houses, this year’s Best Picture Oscar/BAFTA winner is an instant Three Days of The Condor style retro classic. Affleck is Redford in tweed coat and floppy …

I’ll admit, I avoided Miranda for years because I thought it was too ‘juvenile’ (ha! As if that’s ever been a barrier to great comedy - juvenile is pure Seinfeld, and Fawlty, and Wodehouse, and any number of grown-ups …

Here it is, the culmination of all this Halloween hysteria! If I’ve learnt anything putting this podcast together, it’s that though most people don’t really believe in ghosts, everyone has some sort of story or …

It’s been over two months now since Rosie Kilburn died. There’s a Facebook page dedicated to her memory, and her blog, of course, continued by her parents to keep on raising awareness & cash for cancer causes across the UK. Right …

The Fault In Our Stars

Love stories can be many things: epic, poetic, abysmally internalised or cast across continents. The Fault of Our Stars is none of the above, but it is funny and deadly and, like all good love …

It’s been over 18 months since my last diary entry and I can’t explain that. Has Eva changed? Undoubtedly; but, fundamentally, she’s also remained the same. Her awareness of the world around her has matured, …

The City of Samba